Blog   »   Recording Connection mentor Taylor Franklyn on DJing, the EDM scene & How Students Can get Ahead

Recording Connection mentor Taylor Franklyn on DJing, the EDM scene & How Students Can get Ahead

Recording Connection mentor Taylor Franklyn is a great example of what it looks like to diversify in the music business. After establishing himself as a club/touring DJ, he expanded his skills into audio production, and currently balances the occasional DJ touring schedule with his position as managing engineer for the Denver Media Center in Denver, CO.
[break] Taylor chats with us about his work as a DJ, projects in the studio, the burgeoning Denver EDM scene, and offers key advice for up-and-coming Recording Connection students. Enjoy!
[break] [break class=”no-mobile”] 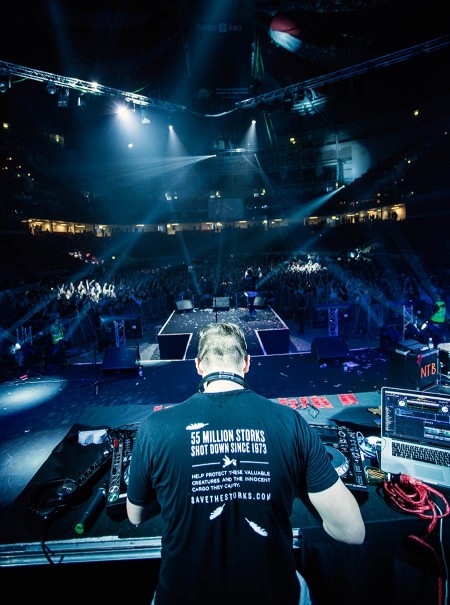 RRFC: So you started off your career by DJing. What inspired you to begin producing your own music?
[break side=”left”] Taylor Franklyn: Well, honestly just getting a little bit bored just playing other people’s music. Before I started DJing, I was in a lot of bands and went down the route for a little while. The reason I got into DJing in the first place was having trouble locking down a good band…So I got into DJing to be a little bit more self-sufficient in music. Anyway, I think that’s one of the reasons. And then from there, just playing other people’s music and mixing wasn’t as satisfying as writing my own stuff.
[break side=”left”] RRFC: At what point did you decide that you wanted to incorporate more of your skills towards the audio engineering side?
[break side=”left”] Taylor: I used to work in an insurance company doing data entry, which is the most soulless job in the world. And so when I realized that I didn’t want to do something that I hate for the rest of my life, I started to make a career out of
[break side=”left”] RRFC: What type of clients do you guys typically service at Denver Media Center?
[break side=”left”] Taylor: So we do a lot of different things. On the commercial end of stuff, we do quite a bit of audio books, as well as audio for video and post production – lots of TV show kind of stuff. And then on the more creative side of things, dance music is the main niche for me personally. So I get a lot of ghost writing and clients coming in and having me produce their specific tracks for their specific needs, whether it be pop or different EDM stuff. And on top of that, we also do quite a bit of just standard band recording and tracking as well.
[break side=”left”] RRFC: Does it surprise you at all that there’s such an EDM scene in Denver?
[break side=”left”] Taylor: It doesn’t surprise me because I’ve lived here my whole life, and so I’ve seen the scene grow from the early 2000, late ‘90s to what it is today. It’s actually been really interesting to watch it grow, because it’s [gone from] super underground, street scene and trance to some of the biggest names in the dance music world coming out of Denver, which is just really interesting to watch.
[break] RRFC: What projects have you been working on recently? Any artists or commercial work you want to talk about?
[break] Taylor: Yeah, we just wrapped up an album for Transform DJs, and it’s like a 17 track, super huge album. I’m super excited about that. We got it mastered by one of the top mastering engineers in the world to sound super great. I’m super-stoked on that one. It’s an album called Never Alone.
[break] RRFC: Do you still spin these days?
[break] Taylor: I do, yeah. I have some pretty cool tours coming up. I’ll be playing in Guatemala…I fly back home for a couple of days and then I’m off to Europe for a two week tour…Play a couple of shows in the U.S., and then South Africa in March, which will be cool. I’ve never been to Africa.
[break] RRFC: What do you think are the benefits of learning in the studio from day one as opposed to a classroom setting?
[break] Taylor: Well, I know for me, I’m really a hands-on learner. I know that’s a cliché thing to say, but to be able to actually do stuff and not just to read it in a book…this is the ins and outs of how to actually make money in the recording industry, not just how to do this, this and this on paper. It’s how to actually put things into practice.
[break] 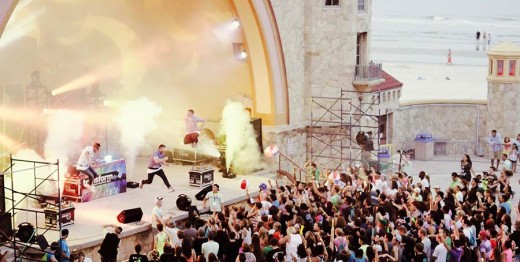 RRFC: What qualities do you look for, personally, in an extern that you bring into your studio and teach?
[break side=”right”] Taylor: Definitely somebody who’s willing to learn and really put in the effort to learn, not just sit and absorb but actually participate…Somebody who’s somewhat of a go-getter, or somebody who wants to continually be involved and help with stuff, not just sit around and observe.
[break side=”right”] RRFC: What kinds of things, in your opinion, can student externs do to get ahead, to potentially secure a job in the future?
[break side=”right”] Taylor: Really stepping up and going above and beyond what is expected from an extern. Looking and seeing what needs to be done. Do those cables need to be wrapped, or does this need to be done, or what do you need help with, versus just sitting and waiting for instructions. Because a good audio engineer or a system engineer needs to be able to take initiative on stuff, and not be told to do every single little thing.
[break side=”right”] RRFC: Are you mentoring any active students who are really doing a nice job?
[break side=”right”] Taylor: Yeah. I’ve got a few really good guys right now. One of them’s named Guy [Pressler] and the other one’s Matt [Krening]… Matt’s actually started his own company doing live sound and doing live tracking. So he’s definitely kicking some butt…[Guy is] more dance-oriented just like I am. And he’s not as far in the program as Matt, but I’ve definitely seen his productions go up a notch and his sound’s definitely gotten better, he’s getting better at mixing. I can see him developing a sound more and more…Miguel [Velgara] just recently started his externship here with me and I am very impressed with how perceptive he is. If something needs to be done, he takes the initiative, makes sure it needs to be done and then does it! In this industry you have to be able to read minds to an extent, so this is a great quality in a student.
[break] RRFC: What do externs need to understand most regarding working with clients in the studio?
[break] Taylor: The client is always right, to an extent. Sometimes you have a client or something that is just…I had a client ask one time for me to put the bass on the left side and the kick on the right side. For those kinds of situations, you need to explain those certain things that you always do… But most of the time, the client’s right, so you have to…even if it’s not your favorite creative decision in the mix or something and you think it should sound A and they think it should sound B, it’s their baby and their track, so you’ve got to let them make their creative decision.
[break] RRFC: When it comes to marketing yourself towards potential clients, do you have any other advice to the younger basic engineers?
[break] Taylor: Yeah, basically number one is you can’t market your gear, because no matter what, somebody’s got better gear, or a better studio, or better this or whatever. You just really have to market how you are different and how you can specialize in what they need specifically, and not just you’re a guy who can record stuff, because there’s plenty of those.
[break] Learn more about Taylor’s mastering services at electronicmusicmastering.com.
[break][break class=”no-mobile” side=”left”]