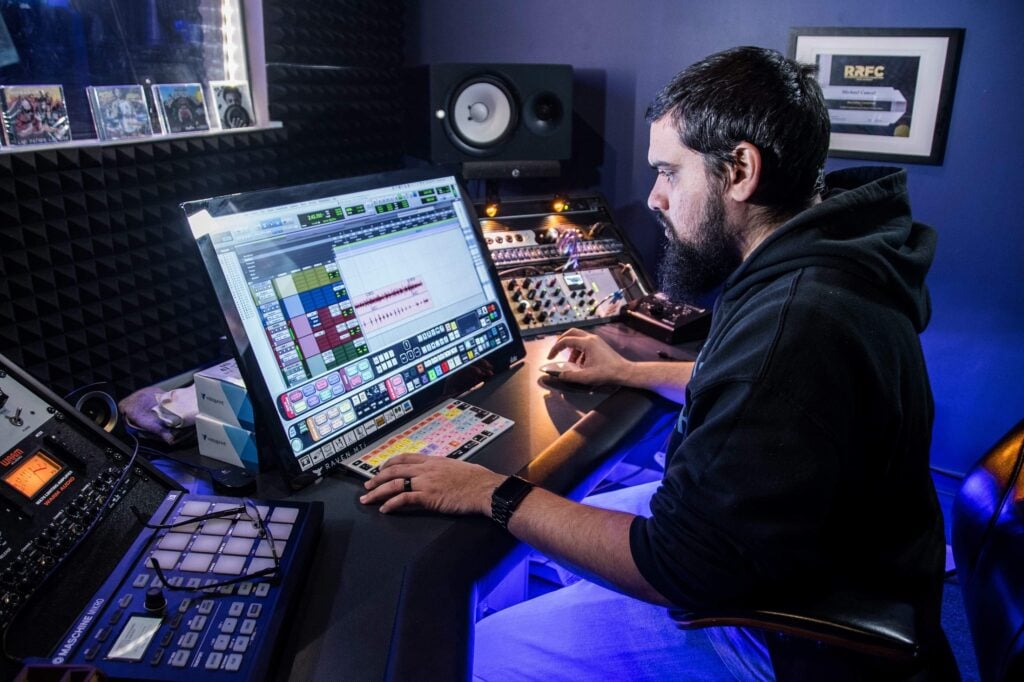 A long-time music industry veteran, Recording Connection mentor Frank Sheadrick grew up in a very musical family, getting his start on drums as early as age 5 and picking up bass as a teenager. During his years as a musician, he has toured with The Temptations Revue and shared the stage with the likes of Fred Hammond, Kirk Franklin, John P. Kee and others before expanding into audio engineering. Working out of SoKnox Studios in Knoxville, Tennessee, Frank is a huge advocate for the Recording Connection and even had a role in convincing his studio to take on our students as externs. In a recent conversation with RRFC, Frank shared a bit of his backstory, bragged on one of his students (female singer/artist Brickelle) and gave some key advice on the importance of honing your craft, staying humble and more. We’ve gleaned the best nuggets from that conversation below.[break] [break class=”double no-mobile”]

ON HOW HE GOT INVOLVED IN AUDIO ENGINEERING AS A CAREER:
[break side=”left”] “My family, they’re all singers and musicians, everyone from aunts, uncles, grandparents, you know, they’re just a musical family and stuff. But age of 5, I started playing drums at the church and everything, and by 13 I was playing the bass…graduated high school and went to Cumberland University, in Lebanon, Tennessee, and that’s when I really started getting into engineering, because it was more hands-on work than just playing music.”
[break side=”left”] [break side=”left” class=”double no-mobile”] ON WHY HE CONVINCED HIS STUDIO, SOKNOX STUDIOS, TO BEGIN TAKING ON RECORDING CONNECTION STUDENTS:
[break side=”left”] “I like the way the curriculum is set up…It actually starts you from the beginning and brings you all the way up to the now…And not only that, it actually gives kids an opportunity to not just look at books all day, but actually go to places where they can do hands on learning…I was telling [my extern] Brickelle that I kind of envy her because when I was at Full Sail, we got a little computer and we talked to the teacher and had class and stuff, but I was never able to actually get hands on until we stopped and were setting up for a show, and I’d run and tell the engineer, ‘Hey, can I mess around with this?’ Or ‘Show me this.’ But having an organization and a group that actually provides that for kids in certain areas, that is a big plus for me…So that’s why I really pushed the job, saying ‘Let’s do this, it’s going to be great, trust me.’ They took that into consideration and granted me that wish.”
[break] [break class=”double no-mobile”] BRAGGING A BIT ON BRICKELLE:
[break] “Every third Thursday we have two bands come in, and we’ll stream them live, and we will record them live, and then we’ll also give them the video and the recording; that way they can have it as a EP, or…if they have fans across the country, or something like that, that want to see them, then they can tune in and see them. [Brickelle] actually stayed for it, and was hands on with setting up the drums and lights, and then as the show was going on, her and a couple of other students, after everything was set, and I just left them. I was like, ‘Hey, it’s your show…I don’t want to hear no squeaks or peeps.’ They did a really good job. Recording turned out great and stuff, and I think she really had fun.”
[break] [break class=”double no-mobile”] HIS THOUGHTS ON GENDER IN THE MUSIC INDUSTRY:
[break] “I don’t look at gender at any point of view, whether it be music, life, or whatever; and like I was telling [Brickelle], ‘You have a gift, and if that’s what you want to do, do it’…If Beyoncé, or Lady Gaga, or Shirley Caesar, or Alicia Keys, if they had listened to that [negativity], they wouldn’t be where they are right now. They just had to get in their mindset that, ‘Hey, I know I can do this. I will show them I can do this.’ And they got the work ethic, they practice their craft, and they went for it, and they’re successful…If you can train it, and you have the will and the drive for it, I think go for it because you never know if you don’t try. That’s my philosophy on that.”
[break] [break class=”double no-mobile”] HIS ADVICE FOR STUDENTS ON WORKING WITH NOTED OR FAMOUS ARTISTS:
[break] “Don’t get star-struck, because a lot of people don’t like that kind of environment. They just want to relax and chill… I went to LA and met with the group 1500 or Nothin’ and they had so much stuff going on, and professional artists walking around, and I got to meet a lot of producers, artists, comedians, and actors while I was down there. And I just maintained my coolness, and by doing that, I was more respectful than trying taking pictures, and trying to get autographs and other things, because doing that actually got them to say, ‘Hey, let me get your information.’ And I’m able to contact them on social media, text…I call it just being chill. If you’re in the same place as them, you’re there for a reason, so don’t go over the top with it…Be yourself, and don’t get too anxious.”
[break] [break class=”double no-mobile”] HIS ADVICE ON HOW TO GET WORKING IN THE INDUSTRY:
[break] I think first thing is practicing your craft…You know, practice is one thing that’s very key, because I don’t think nobody ever became good at what they’re doing without practice, or, you know, putting in the time…Another thing is practice good work ethics. Set goals and times, times and goals for yourself…you have a project, you’re going to spend this many hours on it, and it’s going to be done by this time. And the last thing, I think is most important, is stay humble, because there’s a lot of musicians that are younger, some older, and just waiting to have an opportunity to get ahead…If no one is able to work with you because of your bad attitude, or you think you know and don’t want to listen or take advice or even constructive criticism, that is going to be a downfall…Being humble is one of the biggest keys to making it a success, and that’s just in my opinion.”
[break][break class=”no-mobile” side=”left”]