So often when we touch base with our mentors, we hear valuable truths in the course of the conversation which are worth sharing with our students. We recently had such a conversation with Recording Connection mentor Andy Shoemaker, a Grammy-nominated audio engineer who works out of Rax Trax Recording in Chicago, IL. In the excerpts below, Andy weighs in on the use of analog versus digital equipment, being flexible and proactive in the mixing process, and an important reminder that recording is a service industry, among other things. Read on and enjoy!
[break] 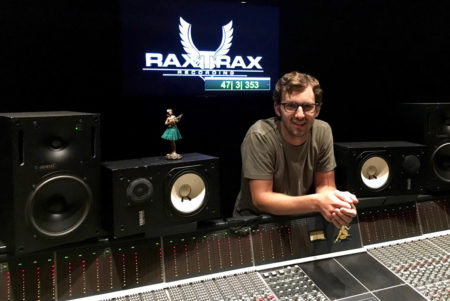 ON HIS APPROACH TO THE USE OF ANALOG VERSUS DIGITAL IN THE RECORDING STUDIO:
[break side=”left”] “My approach in terms of mixing is to utilize whatever tools I have, whether they’re analog or digital, as a means to an end. I’m trying to find what is going to most efficiently get me to my goal… Sometimes on a particular project, I know that it will require a lot of work in pieces, lots of separate sessions. In that case, to do a heavy analog production is going to be a lot of extra work that I’m going to spend documenting and recalling and documenting and recalling. That doesn’t necessarily serve the project well because it takes up a bunch of extra time. On the other hand, I know that there are times when people will perceive an advantage to one method over another. In that case I’m going to try to utilize whatever will put them more at ease or may be more comfortable for them if they want to engage in it.
[break] In terms of the approach to mixing, unless you’re coming from tape to console to tape again, everything is going to have some sort of hybrid of digital in there. There’s a whole spectrum, so whether you go basically fully digital and you’re mixing in the box, or you have something that is heavy analog where you’re utilizing plug-ins but you’re spreading the mix out on the console and using a lot of outboard gear, or something in between such as using analog summing and hardware inserts, you’ve got to weigh what’s going to help you get the sound you’re looking for most effectively. I think that’s important to weigh so that I can be flexible and so I’m not just entirely bringing my own bias to it. Obviously, as a mix engineer, you’re going to have preferences about workflow and preferences about how something’s going to sound.  Hopefully that’s why someone’s coming to you.”
[break] ON HAVING DIFFERENT MIXING APPROACHES WITH DIFFERENT PROJECTS, OR CHANGING METHODS ON A PROJECT:
[break] “There have been times where I’ve worked on projects where I thought for sure this is going to be an Option A mix, and I started it and felt, ‘This isn’t actually giving me what I want. I’m going to adjust to a different method.’  Sometimes the method or piece of gear we think will be the right one isn’t the right option and we need to be able to change gears in order to correct the path. I think that sometimes people who are a little bit on the outside tend to idealize certain processes as if that in itself is the thing. This tends to happen a little bit more with analog because there’s a mystique to it and marketing certainly plays into that pretty heavily. I think sometimes people will look at that process as if that is going to achieve something for them in and of itself. It may, but that’s just a piece of the puzzle. Sometimes people ignore the things that are actually more important, and they get hung up on using microphone A, B, or C or mixing console A, B, or C. Those absolutely play a factor, but they’re not going to trump the performance or the arrangement or songwriting. The tools you use can help inspire a better performance but they’re not automatically going to make something better just by using them.”
[break] ADVICE ON BEING PROACTIVE WITH DECISIONS DURING THE RECORDING PROCESS, AS OPPOSED TO WAITING UNTIL POST:
[break] “While you’re recording, you should always be trying to get as close to the sound you want as an end result. You should be making decisions… I worked with an artist just a couple weeks ago that was going for a particular vocal sound, and so rather than doing it after the fact, I did it while he was recording. He wanted his voice to sound like the sound of an old blues harp playing through an amp, so I set up a system to create that sound. He ended up doing the whole thing in a single take because he was like, ‘Man, I was just enjoying what was coming into my headphones. I was just vibing off of that and having a good time singing this song.’ He was able to put himself into the right frame of mind, into the right mood, right from the get-go… So the approach, the technique, all of that on my end did help inspire him and his performance, but ultimately it is the performance and not the studio technique that makes the song.”
[break]

ON WHY THE PERFORMANCE IS MORE IMPORTANT THAN THE GEAR OR TECHNIQUES:
[break side=”left”] “So much of the tone comes from the player. [The] artists themselves contribute so much more of the tone than we want to give them credit for a lot of times. I think as engineers, it’s easy for us to idolize equipment. It’s easy for us to idolize microphones and preamps and compressors, and those are all really important parts of the chain, but it comes down to the source. All those tools are going to help you capture the source in a more interesting or more pleasing way, but they themselves won’t change the source, and if you don’t have that sorted out, then you’re going to be struggling with it regardless.
[break] There are so many times when I’ll work with a really excellent drummer, and it’s like they do so much of the work for you because not only are they playing in time, they also balance the way they’re striking each individual drum, the way they balance the articulation of the cymbals, how hard they’re hitting the cymbals, how loud they’re playing them compared to the drums, the internal balance of kick drums or snare drums or how hard they’re hitting the toms in a fill. All of those things are so much more sorted out with a really skillful drummer, and the tone of that drummer will really be stamped into the recording and affect it probably more than if I was using less quality mics. And the same thing goes for guitar players, bass players, any tonal instrument.”
[break] THOUGHTS ON WHAT YOU LEARN IN A REAL RECORDING STUDIO THAT CLASSROOM INSTRUCTION CAN’T DUPLICATE:
[break] “One thing that is particularly abstract to teach in a classroom is how you need to think of this as a service industry.  For a lot of people I think it’s easier to just put their head down and focus on the technical things like, ‘We’re recording, I’m going to make sure that all the microphones are working, I’m going to make sure that all my signal levels are just right,’ and all this stuff. If you are not giving enough importance to the musician, the artist that’s there in the room, there on the other side of the glass, you risk the performance suffering. So an advantage that a Recording Connection student has over a student at a four year school or trade school or whatever it may be, is that the recording sessions they’re typically working on in a school are arranged for the bands to come in for the student. They’re getting a free recording in exchange for helping out the students, giving the students material to work on. Anything that a Recording Connection student is observing or working on is completely the other way around. We are all here for the artists, and when a Recording Connection student is there observing, they’re there to help me either directly or by helping the artists. So having them jump into that hospitality element of it gives them a big leg up in the way that they think about doing the whole process, because they are hopefully seeing all these positive ways that I am interacting with the artists, trying to help the artist find the right space that they need to be in to perform.”
[break][break class=”no-mobile”]