A busy music industry pro in the Austin, Texas music scene, Recording Connection mentor Nick Joswick is an in-demand engineer, touring musician and (recently) tour manager with a keen interest in helping audio students realize their dreams. As studio manager for 5th Street Studios in Austin, he works with a number of up-and-coming acts ranging from garage rock to hip-hop, and he goes to great lengths to make sure his externs have the opportunity to be immersed in studio life. In a recent conversation with RRFC, Nick talked about current happenings in the studio and bands he’s working with, took time to brag on some of his students, and offered helpful advice for those currently working through the curriculum. Enjoy!
[break] 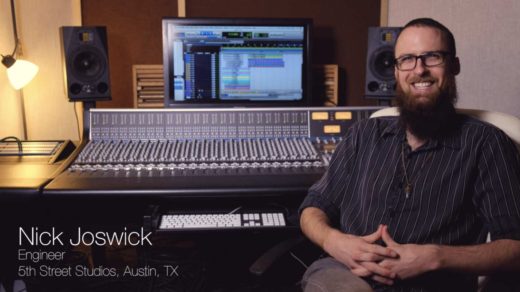 RRFC: So what have you been working on lately in the studio?
[break side=”left”] Nick Joswick: Well, I’m working on a record right now with a local hip hop band called Magna Carda. They’re really cool in the fact that they have a female MC who fronts the band, and then they actually have a full band behind them. So it’s kind of full band hip-hop, which is the perfect fusion of kind of what my specialties are, as working with bands and then knowing the hip hop side of things. We did one record last year, and then we’re in the midst of working on a record right now with them…I just released a record a couple months ago with this band Toma. Actually, the lead singer for White Denim was producing that record, so he and I kind of tag teamed that, and we got one of our really good friends, an incredibly talented engineer, Jim Vollentine, to mix that record. They just released that not too long ago, and that’s something I’m really, really proud of. It came out really cool…We’re kind of working on their next release as well.
[break] RRFC: We hear you’ve been on the road doing some tour management?
[break] Nick: Yeah…I’ve taken on tour managing. So I’ve been on the road quite a bit over the past year with the band Black Pistol Fire…a rock and roll duo, kind of garage/blues rock…duo out of Canada originally, but they now reside in Austin. They actually have recorded a lot at 5th Street Studios, and that’s how I came to know them and become friends with them. They finally got to a point where just the two of them were doing so many shows across the United States and all this travelling that it was a little too much to handle. So they graciously took me on, and I’ve been helping them manage their tours and do all the stuff that they don’t want to do so that they can focus on playing music… We just actually got back from doing Stagecoach, which was not our typical scene. The Stagecoach Festival is on the same festival grounds where they hold Coachella…So they asked us to play this year and we went out and did it even though a garage rock band didn’t necessarily fit in with the country vibe of Willie Nelson and Jerry Lee Lewis and Maren Morris and a bunch of the big name country acts that were there. But regardless, it was a lot of fun.
[break]

RRFC: What’s happening currently in the studio with some of your students?
[break side=”left”] Nick: One of my students, William Assama, started taking on some sessions and doing some work in our B studio, which is kind of more of a mixing suite/hip-hop studio because it just has one little vocal booth and a nice SSL console. So for hip-hop it’s the perfect combination. So he’s been taking on some sessions and doing some really cool stuff with that. Then I’ve also brought on Gaston Zuniga, who has been helping us book some sessions and reach out on our social media. He’s helped take on that role with the studio as well. So outside of our lessons and everything, I’ve been trying to incorporate the guys into studio life as much as possible and make it a fully immersive experience.
[break side=”left”] RRFC: One of your former students, Chris Locke, has gone on to do really well, recently opening his own studio. What did Chris do right to be able to get as far as he’s gone, in your opinion?
[break side=”left”] Nick: He’s done a lot of things right. That very first key tenet of hard work and applying yourself—he was one of the kids that just showed up every single day with a big smile on his face to anything that I asked him with a very enthusiastic, “Yeah, sure, I’ll do that,” and it didn’t really matter what it was…If you just sit down and put in the time, some of this stuff will come to you. Another thing that he really did right was he identified his niche. That was hip-hop, and he came in to me, I remember one of the first things he said was, “I don’t know anything about this. I just know that I love to rap, and that’s my thing. I love rap music and hip-hop music.” So I took that and I tried to apply it as much as I could to very specifically cater to what he was passionate about…That’s pretty much what he solely does now, and I couldn’t be more proud of him, because he really took to it like a duck to water. And he’s doing great things right now, and I’m super proud of him and really happy to see that he’s a Recording Connection success story.
[break] RRFC:  Do you see students who get intimidated while trying to learn the aspects of the craft? What advice can you give these students?
[break] Nick: I think that sometimes it feel a bit daunting, especially when you get into the first couple of lessons of the Recording Connection program…You’ve got to break it down, and you really have to start thinking about the physics of sound and how sound actually moves and works and how we perceive sound as human beings…If you don’t know how sound works, then how are you going to know how to actually form it and sculpt it and make it into something that is powerful and emotionally moving? And for me, at least, one of the big things that I always found really helped me with my [own] studies was trying to absorb the information in as many ways as possible. And again, this is what works for me, it doesn’t work for everybody, but for me it was when I was reading the lessons…I would read something and I would try to pick out the main points of that, and I would that down in my own words, in my own notebook, and then I would go back and reread the sentence and then double check the sentence that I just wrote in my notebook…[It] really helped me just absorb and retain everything that I was actually learning…One thing that I always encourage all my students to do is make flashcards, as rudimentary as it sounds, but just writing key terms of what a transducer is, what a condenser is, what a capacitor is, all of these different terms that can get a little bit jumbled or lost. If you have some flashcards and just every night, before you go to bed, just run them for 10-15 minutes, however long it takes, and you keep doing that consistently, it’s going to start yielding results.
[break] RRFC: If someone comes to you as an extern, what can they do to impress you and make you take notice?
[break] Nick: The first big thing is show up with a good attitude. The moment I meet somebody, if they are enthusiastic and appreciative to be in and around the studio, right there, they’re already off on a good foot.… [When] I see that you put pride and effort and hard work into the simplest of tasks, then I’m going to let you sit down at the $100,000 console and touch the $6,000 microphones and things of that nature. So yeah, show up, work hard and enthusiasm, even in the smallest of tasks. I think that’s very important.
[break][break class=”no-mobile”]