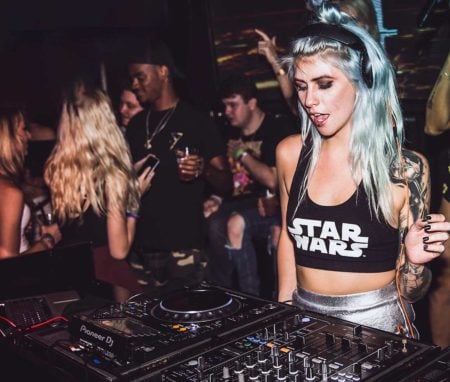 For many of us, it starts with an epiphany—an “a-ha” moment. For Recording Connection electronic production student Emily Stamer, that moment came while attending the Electric Daisy Carnival in Orlando, Florida.
[break side=”left”] “I saw Bassnectar’s performance,” she says, “and I literally just had a weird connection with it. I felt like I should be up there instead of watching…I really felt like I was destined to be performing.”
[break side=”left”] Emily had struggled through a year of college studying hospitality, but she wasn’t happy—so she says her mom started researching schools around Orlando for her to learn music production.
[break side=”left”] “[One] was Full Sail, which is super expensive,” she says. “Unless I wanted to run my parents in debt forever I wasn’t going to do that. And there’s First Academy, but they were very strict with I had to be there every single day Monday through Friday, and it was classes and I don’t do well in classes. I wanted somebody who’s just focused on what I want to do.”
[break] That “somebody” turned out to be Recording Connection mentor Joey Paranoia, a well-known Orlando DJ who specializes in teaching Ableton. Once she met him for her initial interview, Emily says she was hooked.
[break] “Everyone knows who Joey Paranoia is around here,” says Emily. “Every time I say that he’s my mentor, Joey Paranoia, everyone’s like, ‘Yeah, you’re good.’”
[break] It didn’t take long for Emily to see the substance behind Joey’s reputation and his abilities as a mentor. She says he has really honed in on her desire to perform and is teaching her not only mixing, but producing as well.
[break] “We just vibe very well together,” says Emily. “I am so extremely lucky to have somebody who knows the music business. He teaches me everything. I couldn’t ask for somebody better, I can’t even imagine having anybody else, because he knows what touring is like, he knows what I should expect.”
[break] Even though she still considers herself a newbie, under Joey’s tutelage Emily is already starting to develop her own persona and niche as a DJ in the Orlando club scene. “At first I was just learning how to really mix,” she says. “He was like, ‘You should really learn [Ableton] Live, like mixing Live.’ So now I’m one of the only DJ’s in Orlando that mixes off Ableton Live, which is really cool. It’s completely crazy and disparate and colorful…I’m considered unique in the music industry in Orlando right now, which is pretty awesome because everyone [else] uses CDJs…but I still prefer Ableton.”
[break] Emily is also currently working on recording and producing her own EP, which she describes genre-wise as “space bass.” “It’s very out of this world, very futuristic sounding,” she says. “I’m trying to find another word than grime, but it’s very dirty sounding. I don’t know how to describe it. It’s a crazy sound.”
[break] True to form, Joey is using the EP project as a means to teach Emily to produce. “Producing is a whole other animal from mixing on Live,” says Emily. “You don’t stop learning on producing. I feel like there’s always something you can know…[Joey] really helped me remain calm and realize my true potential with all of this. In our lessons right now we just go over my EP and he sees what I’ve added, and he tweaks it or says, ‘You should do this.’”
[break] Now well on her way to fulfilling her dream of becoming a professional DJ, Emily lives for the moments like she described at a recent gig that went remarkably well. “That was the best feeling in the world,” she says. I literally had people coming up to me like, “Dude, that was so awesome.”…Having that beautiful moment where literally I had the whole crowd, I pulled in the most amount of people…It was really cool. People were asking for stickers and my SoundCloud…Just hearing that, having somebody not know me at all, is the best feeling.”
[break] As for the future, after graduating the Recording Connection, Emily eventually hopes to relocate to Los Angeles as she continues to pursue her career. “I just want to tour,” she says “I don’t even care if I’m on a bus and I’m hating life and I’m eating Hot Pockets…I don’t care. I just want to be going around the country sharing my music and meeting new people…That’s where I want to be.”
[break] Connect with Emily Stamer on Instagram: @luciithealien
[break][break class=”no-mobile”]