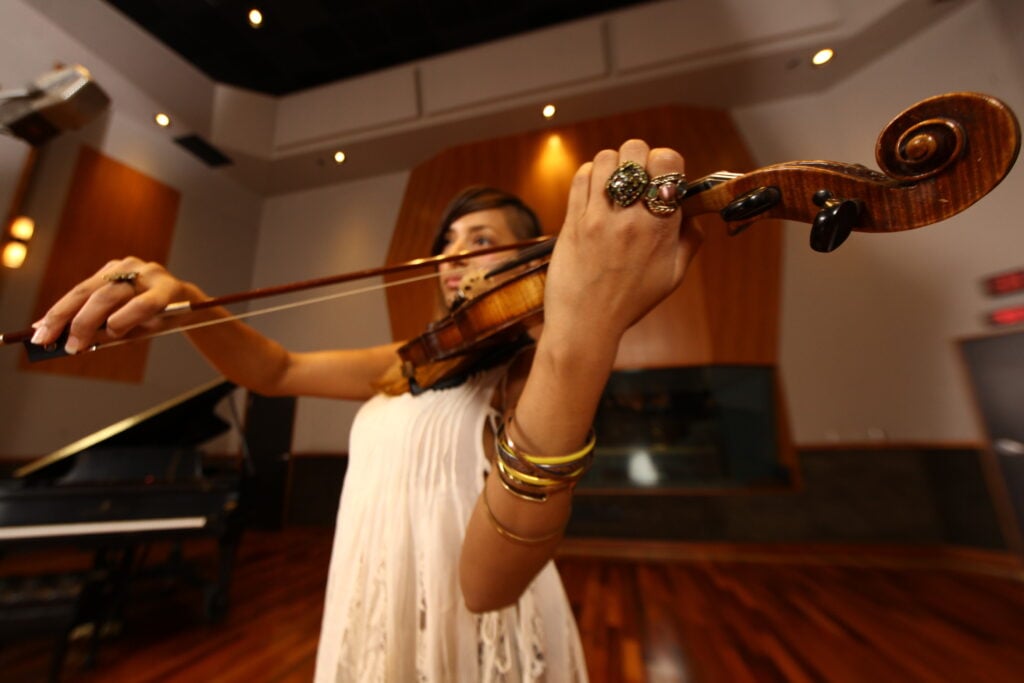 Providing real-world education, support, and opportunity is something we take very seriously at RRFC. In order to ensure we continually set our students and mentors up for success, we’ve started inviting mentors into RRFC “headquarters” in Los Angeles for roundtable conversations with our Admissions and Academic Facilitators team.
[break side=”right”] Here are a few excerpts from our recent conversation with Recording Connection music production and audio engineering mentor Nathan Jenkins (Beyoncé, David Lee Roth, Destiny’s Child, Aaliyah, Mariah Carey, The Voice) covering a number of topics including how he assesses where students are at in their knowhow, utilizing the curriculum to meet students’ goals and interests, and how the newly-graduated can get gigs.
[break] RRFC Team: What led you to becoming an engineer and producer in the first place?
[break] “I went to Berklee because I thought I wanted to be a guitar player, and I got there and I hated it. I loathed it. I was like, “It’s all jazz.” It was a different scene back then, and I was trying to find myself, who I was as a musician. I met my neighbor in the dorm. He was spray-painting his boots silver in his bathtub. I’ll never forget that. I was like, “What do you do?” So he was into this crazy electronic music and stuff. This was like 1995. And he kind of opened my eyes to all this other stuff that was going on, and I was like, I want to do that. So I got into the recording side and the synth side at the program there, and after that I never looked back.”
[break] RRFC Team: On that very first lesson with a student, how do you assess where they’re at in their knowledge of audio and music production?
[break] “[If they’re observing me working with a client], just to keep the flow of the session going…I give them a notepad [and] just have them write down all the questions. ‘Just write this stuff down, and at the end of the day I’ll sit down with you.’ I just spend this extra time with them….That’s when they realize, ‘Okay, I’m really only at step one. I’m not even at step three yet.’
[break] How I came up and how kids are today, or young adults, it’s completely different. I mean, we were just thrown in the trenches…You can’t do that today….And it’s not linear anymore….For me, it was like one, two, three, four, five, six, seven, eight, nine, 10. [Today] they’re like eight, 14, 42. They just grab like, ‘Oh, I want to learn how to side chain,’ but they don’t understand how it’s really working. They just know how to do it. So, I think learning the basics of how the software really works, even at the basic level, is a big help.”
[break side=”left”]

RRFC Team: How are you able to make the curriculum suit the needs of different students with different interests and goals?
[break side=”left”] “One [Christian Joy-Ito] was like, ‘Here’s all my music. I want to just write music and do music.’ He was very focused on that. The other one [Miguel Giron] was very clear, ‘I want to be an engineer.’…
[break side=”left”] Both were very smart kids, but just their style of learning was different. What I found best is just to talk to them. I kind of spend the first three hours or whatever, just kind of hanging out with them, listen to their music, see what they’re into.
[break side=”left”] I had Miguel sit with me for the first week..I work on The Voice for the Live Rounds. We do all the music that goes to iTunes. So every week we do 12 songs, start to finish, in three days, 72 hours straight and I mean that literally….There are six of us. It starts with the tracking. They track the songs. Then it goes to me where I cut everything and chop everything and make sure it sounds perfect. Then, it goes to a room where they record the vocals, then [from] a comping guy to a tuning guy. Then, it all gets put back together and goes to the mix guy. I’m in the funnel-hose of the whole thing….Everything comes through me, all the music.
[break side=”left”] So [Miguel] just sat with me for 12 hours a day, [looking] over my shoulder, and watched what I did over and over again. Then on the second day he watched. Then on the third day, I had to send him home because he was like, ‘I don’t know what I’m doing here. I don’t know what’s happening anymore.’
[break side=”left”] But by the next week you could tell that he was getting it. He understood what was happening…So I gave him one of my sessions, and he had a laptop. I was like, ‘Okay, go cut the drums.’
[break side=”left”] Christian was different. He was very, ‘I want to write music, I want to work on production, I want to get better as a producer.’ So, I’d have him come in every week, put him on a station and he would just work on his production…then we would interact throughout the day about what he should or should not do. And, for him, it was really about learning how to listen to himself as an artist….It wasn’t a very like, ‘I want to learn how to cut drums.’ But he got really good at listening to production, to himself, taking a step back. I think as a producer, or as an artist, you really need to do [that].”
[break side=”left”]

RRFC Team: What’s your advice for our graduates on how they can get work when they’re just starting out?
[break side=”left”] “Go to a club…You’ve got to get outside your network, because if not, you’re never going to have any work, because you’re going to just be stealing work from each other. You’ve got to go outside of people you know. So go to a show, approach people…’Hey man, I really like your stuff. Let’s do a track,’ or, ‘Do you need help with something? I can help you with your mix,’ or whatever. That’s what they’ve got to do.
[break side=”left”] That’s how I survived. I went and saw shows. I still work with a ton of indie bands. A ton of them. I probably do five or six indie groups a year. And it’s great….I just did this darkwave/shoegazer/industrial thing. It was cool. I met all these great people out of it, and it was fun. And these are people that were not in my network at all….
[break side=”left”] I told Miguel, ‘If you can chop drums, I can get you work.’ It’s whatever, $100 a song. But if you can tune a vocal, there’s a lot of work out there.”
[break side=”left”] Learn more about Recording Connection for beat making and hip hop music school, Ableton, audio engineering, and more!
[break side=”left”]