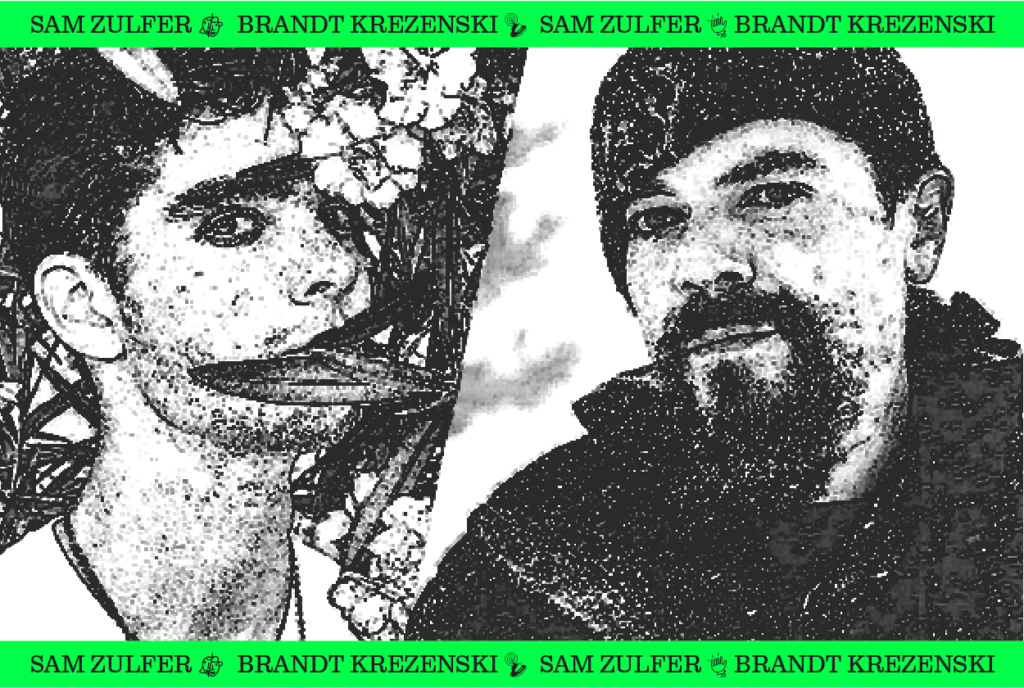 Sam Zulfer (Producer Names: BigSammyZ and SjZ) and Brandt Krezenski (Producer Name: Stoic) are a Student Facilitator and Student in the Ableton Electronic Music Course, who have begun collaborating with each other over the past few months on a set of projects. I sat down with them to discuss finding each other, creative inspiration, and their hopes for the future.

How did you two originally link?

Sam: Brandt enrolled into our Ableton Electronic Music Course and I was assigned as his academic facilitator, which are essentially the tutors and overseers of the program. We make sure students get through the program effectively, make sure they understand the concepts, as well as act as an additional mentor to them.

Sam, you’ve been the academic facilitator to a ton of students, right?

Sam: Yea! I’ve been with the company for about three years and have worked with well over a hundred students.

How did you become an academic facilitator?

Sam: I went to school for audio engineering and have been producing music for about eleven years now. I had the opportunity to move out to LA after graduating from Columbia [Chicago] in 2017. I found myself more producing as a hobby and doing freelance work, then I saw a posting for it. I had been an audio production tutor in college, and it seemed like the perfect job for me. I applied for it, I got it, and I’ve loved it ever since.

How did this relationship transition from Student/Teacher to one of collaborators?

Sam: I offer sessions to all my students and Brandt started booking them almost immediately. Early on I could see that Brandt was really absorbing all the information I shared. I could see that he was applying it and really trying to understand it. He started making massive progress at a very quick pace.

Brandt, how did you find this program?

Brandt: I found this program after searching through various online courses—like Youtube—and had been getting pretty confused. My aunt, who knew a student, finally recommended it to me. I checked it out and was like, “this is too good to be true.” It seemed so intimate and in depth. I had to do it!

Also Brandt, I think the assumption for most people would be that it’s the teacher who chooses a worthy student to collaborate with, but you also had to make the decision to choose Sam, what made him a worthy collaborator in your eyes?

Brandt: I mean, I knew right away that Sam knew a ton of things I didn’t, and I felt like he was my sensei in a way. He really helped me understand a lot of new concepts. He makes music that I’M interested in, which made me excited to make music in general. Also, he’s just an awesome down to earth person.

At this point do you guys feel like you’re creating as equals, or do you still feel this sort of “Sensei”/ Pupil dynamic?

Brandt: I’m forever going to be a student. I’m always learning every day and I think everyone is still learning no matter what.

Sam: I’m relatively confident that Brandt will pass me up within a year or so. I’m still a few steps ahead of him, but it’s not by much, and he’s closed a lot of ground rather quickly. From a technical perspective he has a bit of time, but he has an inherent ability to put together unique ideas. At the end of the day people like a song because it’s good. Only a producer is going to notice if the mix sound is tight and the drums sound perfect. Your average listener is going
to enjoy it because it’s a good song.

Sam, at this point have you started to learn things from Brandt?

Sam: In teaching overall, with Brandt, but with all my students, I feel like I’m relearning a lot of important foundational things and getting a better understanding of them as I continue to repeat them.

I know you both are interested in philosophy. Did this commonality bring you two together and contribute to your desire to collaborate?

Sam: For me, a big part of teaching is helping students understand themselves as an artist. We had a lot of discussions at the beginning about staying invested in making music, because it’s not always fun. We started talking about Marcus Aurelius, meditation, and stoicism.

Brandt: I think philosophy is my therapeutic way to figure things out. Even though they’re ancient they’re still so applicable. I like stoicism because it’s not so much questioning the nature of reality, but instead directing the mind to have a firm grip on reality. I use philosophy to figure out ways to be more creative. I apply it to my work, use it for motivation, and use it to manage anxiety through a concept called “premeditatio malorum,” which basically means to anticipate the future through visualizing all the downfalls, but being resilient enough to prepare for them. There’s a Marcus Aurelius quote that’s meaningful to me, “The impediment to action advances action. What stands in the way becomes the way.” Whatever obstacles are in your way have to become a fuel for you to continue on.

“I lIkE sToIcIsM bEcAuSe iT’s nOt sO mUcH qUeStIoNiNg tHe nAtUrE oF rEaLiTy, bUt iNsTeAd dIrEcTiNg tHe mInD tO hAvE a fIrM gRiP oN rEaLiTy. I uSe pHiLoSoPhY tO fIgUrE oUt wAyS tO bE mOrE cReAtIvE.”

You guys have mentioned that your music is inspired, in part, by Norse mythology. Can you speak more on that, and talk about how it informs your process and aesthetic?

Brandt: For this project, it’s just a fun way to get those creative muscles moving.

Sam: If you are a painter, sitting down to a canvass, with the whole rainbow of colors to work with, it can be intimidating when you don’t know what direction to go. It’s important to have some boundaries to work with. With mythology we’re assigning parameters. We are taking these God-figures and allowing their personalities and the stories surrounding them to influence the emotions we put into the tracks. If we have a particularly angry or aggressive track, we might go with a vengeful God.

Dubstep has a very specific subculture surrounding it, are you guys drawn to it as a culture as well as a musical genre?

Sam: I was a huge metalhead in high school, and then I saw deadmau5 when I 14 and switched. Something about the music made sense to me. I love going to shows, the culture, how much it’s grown in the U.S. I’ve been to over 50 shows. There’s a lot of crazy
dubstep here in Chicago right now.

Brandt, because of your age and location, I’d guess you’ve come to the table with less lived connection to this subculture.

Yea, I went to my first show ever this year. I loved it so much. It was so cool, just to be amongst that crowd. I’m not that experienced in the subculture, but I’d love to delve more into it in the future.

Do you guys see yourselves going on tour with this project, or do you see it existing solely in its digital form?

Sam: It depends on how it’s received. For me, I see Brandt’s talent and if I can assist his progression or get him signed to a label, I want to do that. By all means, he’s going to go out into the world and play these songs. I don’t know if I’ll be there, but he will be.

When can we hope to see this project be released?