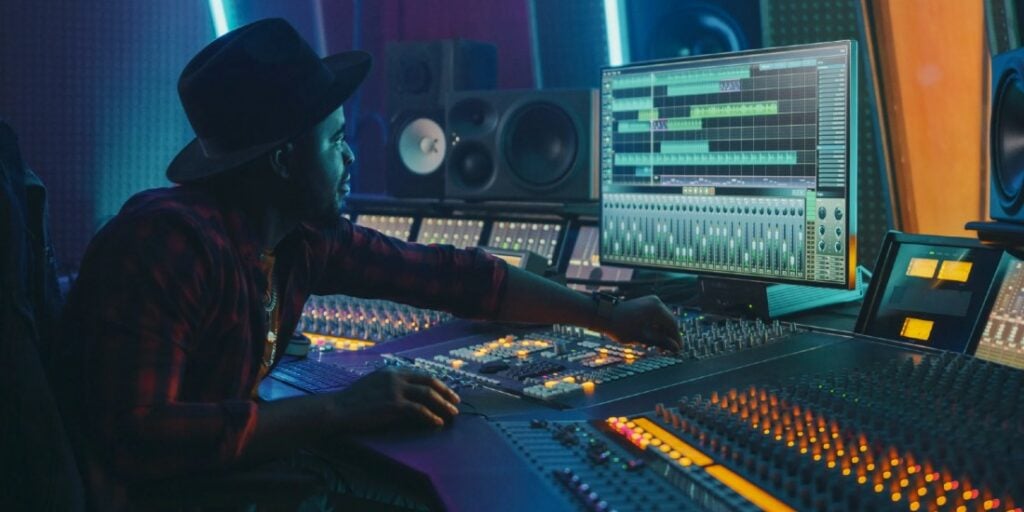 What is a DAW (Digital Audio Workstation)?

The music industry has come a long way since needing to record a song all in one take, all in one place. Today, the brass can be in New Orleans, the vocals in Nashville, and the percussion in Pretoria. An audio engineer then brings it all together thanks to today’s amazing gear, software, and digital audio workstation (DAW) technology.

Of course, getting the band together in the recording studio is still a standard way of making music. Even then, singers are often placed in a vocal ISO booth for the best sound and clarity. Rap and hip hop producers generally don’t even use live instruments. Using samples, drum machines, midi keyboards, and other digital tools, they can make chart-topping music with just an engineer and producer in the control room.

However, whether it’s a folk trio, a heavy metal band, or any other genre, the one tool they all have in common is a digital audio workstation. Expanding on the single track of yore, today’s DAW can be used to record 32, 64, or literally hundreds of tracks. So what is a DAW?

What is a DAW (Digital Audio Workstation)?

A DAW or Digital Audio Workstation is a music production software that gives you the ability to record audio and produce music on your computer. Designed for those in the recording industry, the digital audio workstation’s user interfaces replicated many of the same features of a multi-track tape recorder. Play, record, and other controls such as waveform, track controls, a mixer, and so on. In fact, many of the most popular DAWs have very similar interfaces.

DAWs also have the functionality of a computer. Engineers, sound designers, and producers can use many of the standard computer features – copy, paste, undo, etc. – when working with their tracks. That ability just wasn’t available with analog recording, a fact bemoaned by many of today’s audio and music professionals. Where music production once only had analog, now digital (or a hybrid of the two) is the dominant production setup.

A big part of what makes the DAW so powerful is the number of available add-ons with new options popping up all the time. VST plugins give the DAW even more versatility, sample packs expand audio file libraries, and recording software programs are constantly being improved.

While digital audio workstations often have the same functionality and similar interfaces, if you find a DAW you like, stick with it until you learn it well. Then take a crack at the other ones on the market. Audio engineers who can seamlessly flow from the latest version of Ableton Live to Pro Tools, FL Studio to Pro Tools are often in-demand.

What are a DAW’s computer requirements?

This means you can be mixing and mastering, working with audio and MIDI files, and creating beats and loops on the desktop or laptop computer you already have. All you really need is enough RAM, processing speed, disk space, and a big enough monitor to see the different views. And reliable internet is also a necessity for downloading updates, plug-ins, sample packs, and other add-ons.

Free or earlier versions of a digital audio workstation won’t need as much power obviously because they won’t have all of the features of newer versions. You can even download DAWs for tablets or mobile phones, but it can be kind of difficult to work with larger arrangement views on smaller screens.

Ardour is an open-source digital audio workstation program, available on Linux, MacOS, Windows, and Android operating systems. While Ardour is free, unless you’re familiar with the source code, you’ll need to pay for updates on a Mac or Windows platform. However, the functionality is relatively robust.

What are the best DAWs?

No matter what type of computer you have, you’ll be able to find a DAW that fits your level of experience as well as your finances. Search any app store for “free digital audio workstation” and the list is endless. Really, you can download any of them and start poking around to get a feel for what they do.

Already have a little experience with midi sequencers, audio interfaces, and virtual instruments? Thinking about making this a career? You may want to narrow your search to the most used DAWs in the industry: Ableton Live, Logic Pro, and Avid’s Pro Tools.

Used by such EDM luminaries as Deadmau5, Diplo, and Skrillex, Ableton 10 Live is a favorite used by top artists from around the world. Containing an array of instruments, samples, and other features, Ableton Live gives today’s EDM producers everything they need to start making, mastering, and mixing recorded audio.

Just starting out? Skip the full version for now and look into their free version, Ableton 10 Lite. It won’t have all the bells and whistles of the full version, but budding music producers can get a start on how a DAW should look, feel, and work. Because it’s an Ableton product, you’ll easily be able to slide into the full version when you’re ready–at a much bigger price tag.

There are no free versions of the Logic Pro software, but you may be able to find some lower-priced versions as part of a software bundle for Mac computers. If you’re ready to spend some bucks (which we don’t recommend if you’re just starting to learn a DAW), you’ll be working on the same platform as Swedish House Mafia, Hardwell, and David Guetta.

What makes Logic Pro so popular is the ease of use. It’s also made for Mac users, and people can be very particular about which computers they use. As we’ve said before, the top DAWs all share similar features and Logic Pro is no different. If you can master this software, you’ve got a good foundation to take on the music industry.

One of the first commercially viable DAWs on the market, Pro Tools continues to be the software many professionals use. Pro Tools helped start the electronic music revolution and has versions available for both PC and Mac. Dr. Dre, Kanye West, and Rick Rubin all use Pro Tools.

As the original, all other DAWs followed Pro Tools–but does that mean it’s the best? That’s largely subjective and the answer depends on who you ask. You certainly can’t go wrong growing your experience with the software. It also helps that Pro Tools offers a free version so that newbies can get their feet wet.

With advancements in mobile technology, anyone can produce a funky bassline or sick beats using just their phones. Take some time and wade through the multitude of free digital audio software choices to produce music while you take the bus or train home or to kill time on a Wednesday night.

Here is a list of 8 free DAW Softwares you can use to take your music production game to the next level:

The History of Digital Audio Workstations

The first DAWs were conceived in the late 70s and early 80s. Soundstream, which developed the first digital recorder in 1977, developed what is considered the first DAW. Bringing together a minicomputer, disk drive, video display, and the software to run it all was the easy part.

Finding inexpensive storage and fast enough processing and disk speeds to run a commercially viable DAW proved the main challenge for the ensuing years. But as the home computer market exploded with the likes of Apple, Atari, and Commodore Amiga in the late 1980s, size and speed concerns were no longer an issue.

From there, Macromedia and Digidesign began producing programs that could edit audio samples and perform simple two-track CD mastering. In 1994, 4-track editors were introduced to the market and major recording studios began to take notice just as Pro Tools, Cubase, and the first Windows-based DAWs came on the scene.

Thanks to the accessibility that the DAW provides, electronic music became the megalith it is today and anybody who wanted to make music in their bedroom, basement, or local park bench could do just that. Whether they should is still a point that’s up for debate.

Ready to Learn a DAW?

The Recording Connection offers programs covering Pro Tools, Ableton Live, Advanced Ableton Live, and Logic Pro X specifically created for those looking to make music something more than their hobby. Our programs start with the basics of music, how to set up your DAW, and move through the practices you need to master to use it to its full potential. The best part? You won’t do it in a classroom—you’ll do it in a real-world working studio.

Our unique programs pair you with a mentor – an industry professional – whom you’ll extern with, side-by-side. Recording live audio, importing samples, and setting up your peripherals are all in a day’s work for audio engineers and producers. If that’s the future you want, Recording Connection can give you the head start you need to succeed.

The rest is up to you. Our most successful graduates are the ones that put in the work in the studio, at home, and whenever and wherever they have the time. They handle themselves professionally, act responsibly, and do what they said they were going to do. It’s the work ethic that allows them to network, make vital connections in the industry, and build careers they’re downright thrilled about.