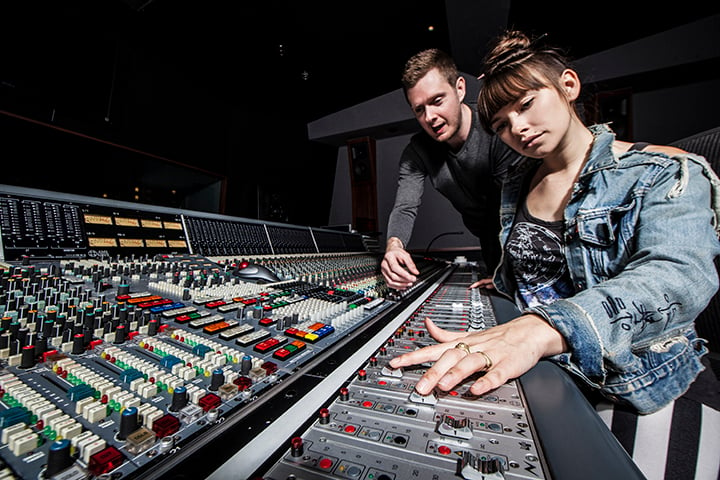 WHAT DOES A RECORDING ENGINEER DO?

Recording engineers, like record producers are involved in the recording, editing and mixing of live audio.

Many recording industry hopefuls have grandiose dreams of becoming the next record producing mogul, the next Kanye or DJ Khaled. But what most people don’t consider is that no one starts at the top. They have to work their way through the ranks, make connections, and position themselves for success.

It’s usually the record producer who builds the vision for a song. They work with the artist to sonically tell the story of the album. The producer implements the artist’s vision by selecting the performance takes from the singers and musicians, and arranging the music to most accurately evoke emotion.

What Sound Engineers Do

The recording engineer will usually be the individual who sets up the singer’s microphone, mic up the drum kit, and make sure everything is appropriately connected into the sound board. Recording engineers deal in the most hands-on aspects of recording live music and audio. They’re the instruments of execution. They’re the ones getting their hands dirty making sure everything goes according to plan. That the artists and producers have what they need to create the work.

However, it’s not an easy job. It’s not something where you just sit around watching people do nothing. We recently sat down with some of the most impressive producers in the business and asked them all what they look for, in terms of hiring recording engineers. We really wanted to get to the bottom of the selection process. To really understand what it takes to thrive and succeed in the industry.

“If you’re an engineer now, you can’t just be an engineer,”  record producer Warren Huart told us. “I’m not trying to discourage people from becoming an engineer. Yeah, that’s great. But (you should) become someone who’s an engineer who is musical, and can write songs. And can get stuck in there. Basically, be able to produce. Be able to play on things. Be able to help on the songs and mix things. Be a little bit of an entrepreneur.”

Warren has worked in the music industry since 1993. He’s worked on projects with The Fray, Korn, and in film and television projects like Transformers, Scrubs, and Inglorious Basterds. He’s been around long enough to know how things operate, and what the best way is to succeed.

When Warren says “be an entrepreneur” he knows what he’s talking about. He’s someone who has been in the trenches and has seen the industry evolve and grow. He’s someone who’s had to adapt and move forward. Which is exactly what a good recording engineer has to do. Both on a micro and macro scale. You start by setting up mics, and before you know it you’re producing things on your own, building your own client list.

What to Expect as an Audio Engineer

It’s important to be making connections and building friendships. Because you’re going to be spending a lot of time with people. It’s common for recording engineers to work with artists for days or even weeks before a recording session begins. Engineers assist recording artists in arriving at the studio, setting up their instruments, and generally preparing everything for the recording sessions.

Once recording actually begins many recording engineers will essentially work as producers. Others merely act as engineers, allowing the artists to record as they want. Recording engineer is a title that has a wide range in responsibilities. The primary duties are always the technical aspects of the process. But, depending on the individual, that can blossom out to more creative pursuits, as well.

Whether it’s providing another set of ears for a producer, being a soundboard for ideas to bounce off of, or ducking into a room to fix a harmonica mic, life as an audio engineer can be very creative and fulfilling. It can also be fairly lucrative. If you are a music person, who loves the idea of constantly hustling and getting your hands dirty, then this could be a path forward for you. The industry is always looking for people who can think on their feet, react quickly, and problem solve. Being a recording engineer might just be your ideal career and a lifelong passion.